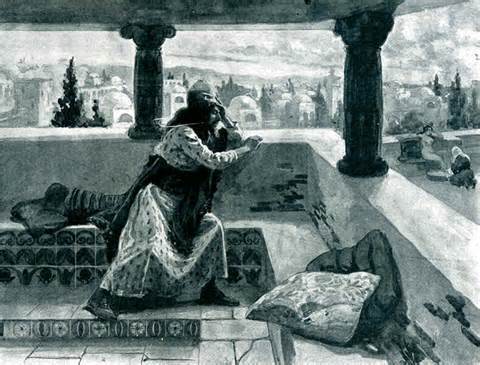 In today's sermon I made a comparison between David's liaison with Bathsheba and the abuse and sexual harrassment revealed by the #MeToo movement. While the Bible does not mention rape or coercion in his encounter with Bathsheba, David abused his position. Given his status and power how could Bathsheba say no?

David ignores his moral compass in his encounter with Bathsheba. And he throws it away when he attempts a cover-up.

But when God sends Nathan to confront him, we see another side of David. In this regard David is very different from the many men who have been 'outed' by the #MeToo movement. David publically owns what he did: "I have sinned against the Lord" he said (2 Samuel 12:13 NIV). In Psalm 51 he pours out his heart in repentance: "Have mercy on me, O God, according to your unfailing love; according to your great compassion blot out my transgressions. Wash away all my iniquity and cleanse me from my sin." (Psalm 51:1-2). Back in 2 Samuel we see David trying to undo what he set in motion, by pleading with God for the life of Bathsheba's son.

In this way David becomes a sort of model for repentence. Repentance is more than a quick and quiet 'sorry'. It includes a deliberate attempt to make things right and turn one's life around.

In reflecting on the half-hearted apologies of some of the #MeToo targets, Danya Ruttenberg, a Jewish rabbi offers this reflection:

"According to Jewish law, though, the most critical factor is repentance, tshuvah — the work that a person who has done harm must undertake. There are specific steps: The bad actor must own the harm perpetrated, ideally publicly. Then he must do the hard internal work to become the kind of person who does not harm in this way — which is a massive undertaking, demanding tremendous introspection and confrontation of unpleasant aspects of the self. Then he must make restitution for harm done, in whatever way that might be possible. Then — and only then — he must apologize sincerely to the victim. Lastly, the next time he is confronted with the opportunity to commit a similar misdeed, he must make a different, better choice." ("#MeToo abusers seek easy forgiveness. Repentance is hard." The Washington Post September 10, 2018)

In the church we are correct to preach grace, but grace demands repentance. If David shows us any example, it is that repentance is hard work.