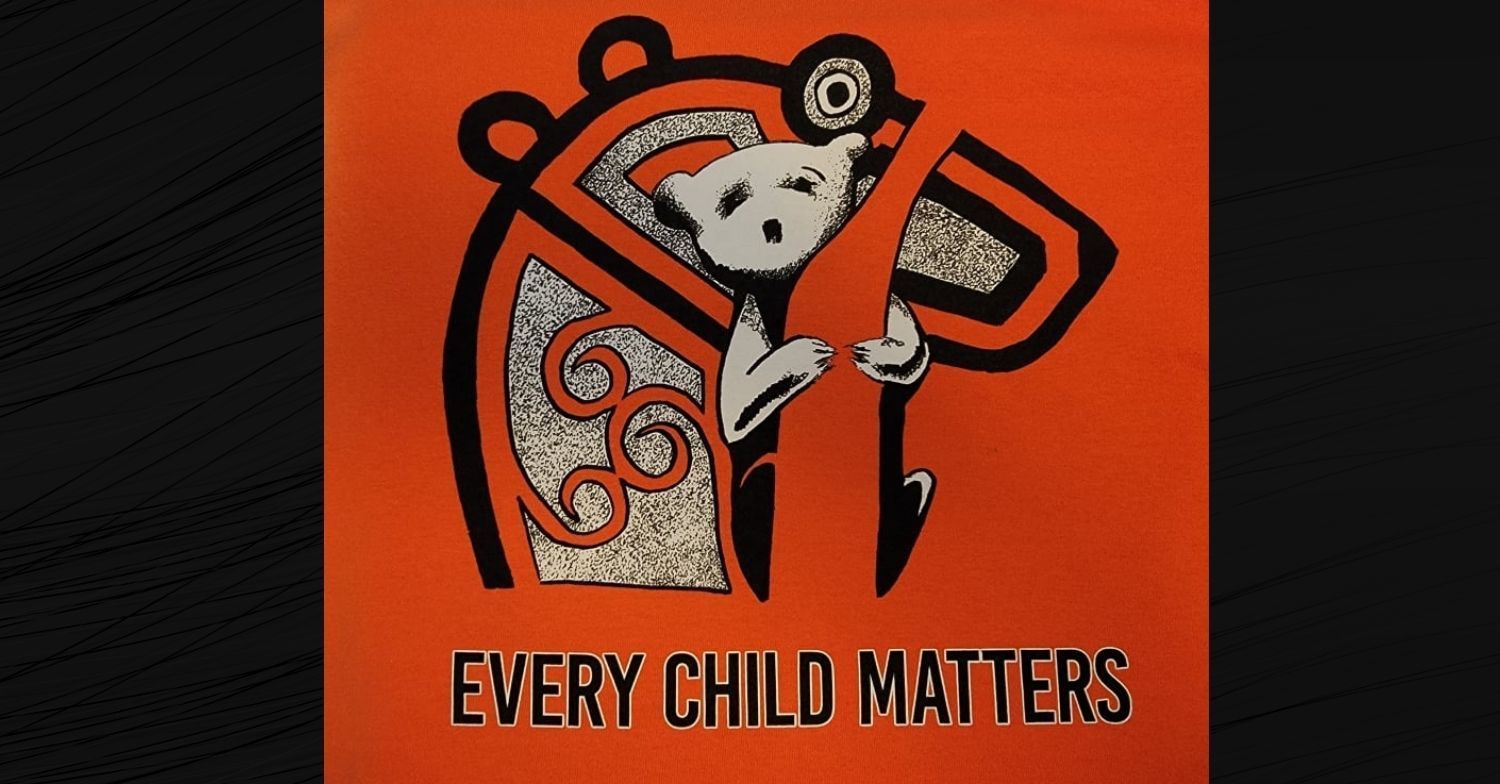 The Sacred Fire at Tk’emlúps te Secwe̓pemc (TteS) burned for 4 days and was extinguished on May 31, 2021, after the last logs were placed by Fire Keepers at 5 pm. Left to burn down carefully, the Keepers kept ceremonial watch as the coals embered to ash. Since then, community members and thousands of visitors have come to mourn and weep the unknown 215 First Nations children that were recently found buried, in unmarked graves down in the orchard, a quick saunter from the Red Brick Building, previously known as Kamloops Indian Residential School (KIRS). Two weeks later, traffic continues to weave through, bottlenecking entry and exit to TteS Band property, and several wooden crosses erected along the shoulder, a pageant of weathered orange articles of children’s clothing. The power of orange and crosses, pronounced on unceded, stolen land.

I work at ground zero on the girls’ side, in the basement of the Red Brick Building. Many of my co-workers are intergenerational survivors of KIRS and hold stories too grim and triggering to share. All of us staff have had our own personal experiences of being “ghosted” in our offices and about a year ago – with permission – I wrote one of my first seminary papers of various KIRS spirit encounters. Be assured, that whenever one of us gets spooked, with grace my co-worker gently reminds us to say a small prayer to the little one trying to get home, just as her mother had taught her.

I write this cautiously, aware of my own tender emotions and the responsibilities that I carry as an active member of St. Andrew’s Presbyterian Church in Kamloops, a seminary student of St. Andrew’s Hall and Vancouver School of Theology, a mother and partner of intergenerational residential school survivors, and as an Indigenous guest working at TteS. To maintain and respect these various duties in a good way, sometimes feels more like a burden, than a gift. Yes, remorse and apologies are necessary, but don’t forget that Canadians are known worldwide to apologize a lot. Recently I was in a meeting where a revered Elder asked, “Why would we trust an apology, especially from a Canadian?”

I’m not sure whether we enter the Garden or the Wilderness when we are baptized, but I have observed that just when I think that we – we, as a collective of Reformed Christians - have a better sense of the direction we are heading, the Spirit reveals another gouge of brokenness. By way of ineffable Indigenous truths and testimony, the urgency for reconciliation wails in all four directions. Speaking once and listening twice, here we meet again, six years after the completion of the Truth and Reconciliation Commission of Canada (TRC) and this time, we absolutely cannot deny that merciless soil is packed under some of our forefathers’ fingernails. More investigations for buried bodies will inevitably proceed and trust that Presbyterians will need to be accountable to more buried children. This issue is personal to me, as both the Presbyterian and United Church controlled the operations of Alberni Indian Residential School (AIRS), the institution that bequeathed my girl into the legacy as a third-generation survivor.

Extending ourselves only through thoughts and prayers to the hurt, traumatized, distant and dissimilar, causes more harm than good, and undermines our service to God. According to the Medicine Wheel teachings, note that spirituality is only one quadrant of the round. A healthy expression of self – in this case, as part of the unified body of Christ – includes not only the spiritual, but as well the emotional, mental, and physical aspects of identity. As Christ-followers, we are aware that Jesus not only prayed, but as well exercised and expressed His full-spectrum of humanness. Jesus showed up again and again. Though the Medicine Wheel is not a Christian ideology per se, it does bear weight to someone like me, as well as the established PCC Ministries with Indigenous People. Plus, the Medicine Wheel is a model that is appropriated often, even within our own Presbyterian tradition and many Indigenous Christians use the Teachings to activate their venerations, communities, and ministries. Too, many of us have known the Medicine Wheel our whole lives and as righteous children of God, each one of us matters.

Injustice never lays low and will continue to circle back each season, with more potency and fortitude until justice prevails. This discovery of 215 innocent First Nations children, is our cue to knuckle down, quit chattering and start examining the long-detailed list of unfinished businesses and promises that we have made, but not delivered. The TRC Calls to Action were clear and there is no need to continue to unpack what reconciliation means to each of us personally, but rather instead we must follow the guidelines that were laid out six years ago by law makers, professionals, survivors, church leaders, and decision-makers. And rest assured that the better way forward for all of us, will be one guided by Creator’s radiance and light that reflects everyone, including the ones we have intentionally or unintentionally sinned against. The time to live in true fellowship is now, after all the lifelong dowry of God’s illumination is witness. For better or for worse, as Christians our primary identity is in our Baptism and as intentional members of the Reformed tradition, we have a commitment to being reformed and reforming according to the Word of God.

I leave you to ponder these questions:

This reflection was written by Yax̣šiqimł (Natika Bock) on the Traditional and Unceded Tk’emlúps te Secwépemc Territory. The Secwepemc maintain a spiritual and practical relationship to the land, water, air, animals, plants, and all things needed for life.