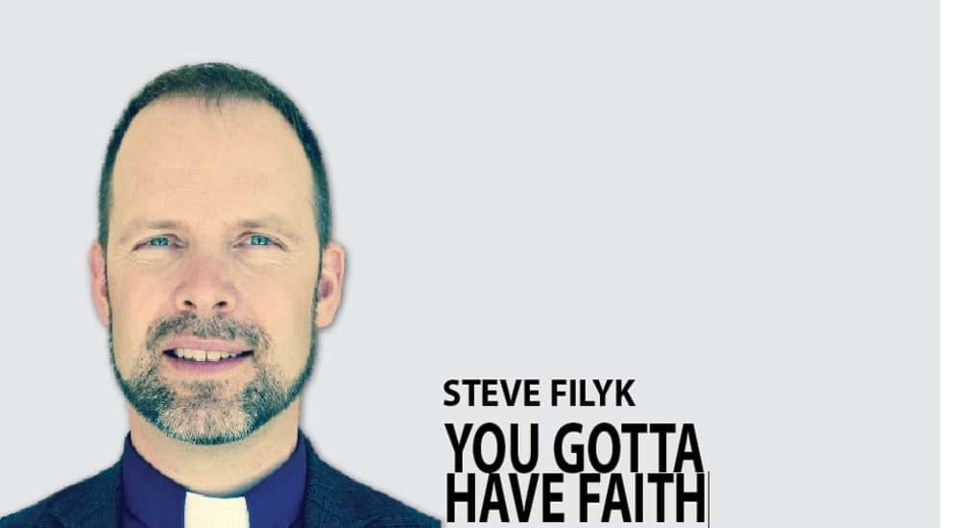 In the 1995 epic war drama Braveheart, William Wallace (Mel Gibson) and his warriors are approached by potential recruits looking to join Wallace’s fight against the English Crown. This includes an Irishman named Stephen.

Standing in the circle of Wallace’s soldiers, Stephen gazes heavenward and says, “Father, I'll ask him.”

He then addresses Wallace: “If I risk my neck for you, will I get a chance to kill Englishmen?”

One of Wallace’s men retorts, “Is your father a ghost or would you converse with the Almighty?” Stephen replies, “In order to find his equal, an Irishman is forced to talk to God.”

My mother saw a butterfly after the death of my sister and viewed it as a sign that my sister was OK.

A friend noticed a penny in an unexpected place, which convinced him that his deceased grandfather, a collector of pennies, was in God’s hands.

An acquaintance shared a story about having an argument with his wife, in which he was told to “shut up.” That doesn’t sound that unusual, except it wasn’t his wife who said that to him. He said it was the voice of God.

When people tell us they hear messages from God, we tend to dismiss them as unwell and view them as deluded or dangerous. Wallace’s men questioned what Stephen was really hearing. Yet Wallace was able to see past this skepticism and welcome Stephen into his band.

I’ve recently been finding myself coming around to Wallace’s side. Yes, there are people whose claims to communicate with God are doubtful. The line they have with the divine is too shaky — the messages they receive are often confused, self-serving or end up being wrong.

Yet I can’t deny the Bible, which for me is the ultimate test of any communication from God, shows us a God who is very interested in communication.

Take Joseph. for instance. When Mary’s surprise pregnancy gives him cold feet about their wedding, Joseph is given a reassuring dream. He continues to receive specific God-given guidance about where to move when his family is under threat.

This communication isn’t restricted to the Bible’s main actors, but is for those playing supporting roles, too. A man named Ananias, from Damascus, is told in a vision that a person named Saul is coming to him for healing.

Ananias protests because he knows Saul is dangerous. The Lord goes on to assure him this is part of God’s good plan.

The Bible teaches that God frequently communicates with people. And the experience of many Christians supports this.

Earlier this year, I discovered a book my cousin had written, entitled What If Listening to God Was Easy?

The book is full of anecdotes of the various ways God has communicated with my cousin and the people with whom he worked. This is the fruit of his own practise of intentionally listening to God.

Now, intentional listening is nothing new in the Christian tradition. But a book full of stories of people hearing God’s voice, coming from someone I knew and trusted, encouraged me pursue this practise for myself.

The method my cousin lays out is simple. First, quiet your heart. Second, focus on Jesus. Third, ask Jesus a specific question. Fourth, note any thoughts and images or voice.

Just to be clear, this isn’t brainstorming. This is intentionally listening for God’s voice, in Jesus’ presence.

Is this easy, as the title of the book suggests? Yes, and no. It requires focus to be still for more than 10 seconds. It requires discernment to recognize whether the thoughts are divine or my own.

Yet through this intentional listening to God, I believe I’ve heard God’s voice. So far, I haven’t heard any audible words. The communication I’ve received is more often an impression of a word or an image that speaks to my personal circumstances.

When it comes to intentionally listening for God’s voice, I have lots to learn. But simply trusting that God is regularly speaking into our own lives is a big step in the journey.

If you asked me a couple of years ago if I thought I’d be hearing from God like this, I’d have said you were crazy.

Circling back to Braveheart, we see Wallace reckoning with God’s voice in a later scene. Wallace is hunting and about to take down a deer with his bow. While Wallace is focused on his prey, we see Stephen the Irishman lunging towards Wallace, dagger in hand.

At the same time, we notice another recent recruit moving menacingly towards Wallace. Treason! But to our surprise, the lunging Stephen runs straight past Wallace, releasing his dagger into the other recruit who was stalking Wallace. He wasn’t conspiring against Wallace, but shadowing him to protect him.

After cutting down the traitor, Stephen and Wallace crouch at the dead man’s body. Stephen confides to Wallace, “Sure didn’t the Almighty send me to watch your back?”

Stephen adds, “I didn’t like him anyway … He wasn’t right in the head.”