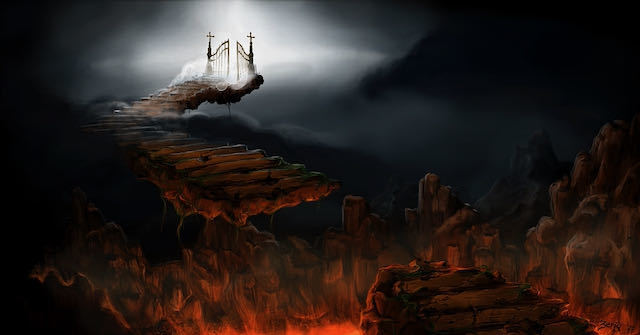 In the movie Talladega Nights: The Ballad of Ricky Bobby, racecar driver Ricky Bobby offers a mealtime grace that quickly turns into a family argument about Jesus, and heaven. Bobby’s teammate Cal Naughton Jr. proudly declares: “I like to think of Jesus like, with giant eagles’ wings and singin’ lead vocals for Lynyrd Skynyrd with like an Angel Band, and I’m in the front row, and I’m hammered drunk…”

The American comedy series, The Good Place, ran for four seasons between 2016-2020 and explored various ideas about the afterlife. The show portrays a group of everyday people having to navigate the place they’ve landed after death—and in some cases figuring out how to make their way to a better place. Without spoiling the story, The Good Place portrays heaven and hell differently than we might imagine. It challenges assumptions about who ‘good’ people really are.

Despite all of its creativity, however, in the end The Good Place endorses the rather conventional idea that you just need to be good enough to enter heaven. Christian belief, however, is different.

In Christianity the afterlife is not a religious math problem, where someone’s accumulated deeds are tabulated to determine whether their life-score is negative or positive, and deserving of reward or punishment. The Christian belief is that Jesus lived the perfect life for us because we could never be good enough. What we have to do is trust him with our life and afterlife. The point isn’t simply that we go to heaven; rather, those who trust Jesus receive a full life now, and the promise of life that is lasting in the good place to come.

Interested in hearing a little more about why people believe in a ‘good place’ and a ‘bad place’? Interested in what Christianity has to say about these destinations and how to get there? Watch the attached first episode fof a two-part series brought to you by two Presbyterian Pastors from the BC interior, Mark Carter (Willams Lake) and Steve Filyk (Kamloops).