A story by Dave Gulley 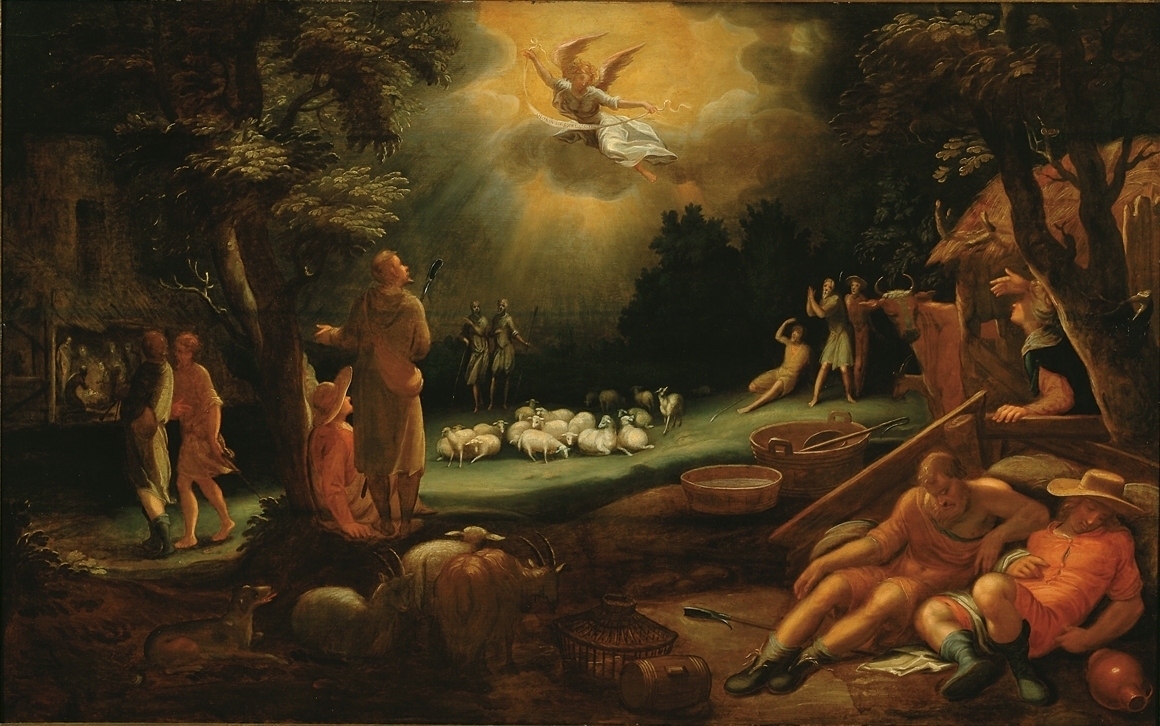 Dear friends this tale is fiction.  However, I believe it is consistent with the birth stories in Matthew and Luke.  For the Shepherd’s Tale especially Luke 2:8- 20.  If you know the story well, I invite you to reread the tale; examining the footnotes as you go.  Otherwise, just enjoy.

Shalom.  My name Simon and, I am a shepherd who herds the sheep of other people. Only 5 of the sheep belong to me.  I work with two other shepherds, Saul and Alphaeus. Together we herd most of the sheep belonging to people in Bethlehem and the surrounding area.  Although our contracts are separate, we work together on most things, especially protecting the flock.  The job is round the clock, so most shepherds are bachelors. However, I do well enough to have a wife a son David and a small house on the property of a big client.  Other than bandits, shepherds are perhaps the lowest station on the scale of Hebrew society.  But one night we were in the middle of a miracle.  Here is my tale.

“What a beautiful night,” exclaimed Saul as he sat down by the fire.  “The stars are incredible.  The air is clear.  It’s almost as if something special might happen tonight.”

“I know what you mean,” added Alphaeus.”  All-day I felt excited like I might be stalking a bear or lion.”

“Sure, sure, but are the sheep safe in the folds?” I replied.

“Yes, Simon.  Everything is secure,” answered Saul.  “All three folds are shut tight.  Your idea to build the folds close together sure has made our jobs a lot easier.”[i]

“Father, may I do the next check of the sheep?” piped up my son David.

“Not yet alone David but you may come with me when I make the next inspection.”

“Should I tell one of my stories?” suggested Alphaeus.

“Okay why not,” I said.  “I know you Alphaeus.  Remember that David is not yet a man so not too much blood and gore.”

“It was on a night quite like tonight,” began Alphaeus.  I was leading my sheep into the fold.  They seemed edgy, unsure of themselves.  As they entered the fold they packed against the front fence.  Suddenly I heard a mighty growl behind me.  I froze.  Slowly I turned and there above the wall was a giant lion.”

“Look!  Look!” cried David.  “There at the back of our fold.  A light, and it is getting stronger.  It looks like a star has blown up.”

“Should we run?” whispered Saul.

“Do not move,” I commanded.

“I also thought that we were done for.”

As he raised his arms Gabriel said, “listen to the host of heaven.”

“Glory to God in the highest and on Earth peace to all men on whom his favor rests,” sang the host of angels as they filled the sky with light and joyous song.[vi]

“Is everyone okay?” I asked as I looked around when everything was quiet and normal again.

“So am I,” said Alphaeus. “Was it real or just my imagination?”

“No, it was real.  It was wonderful,” cried David.  “Wasn’t the angel beautiful? Wasn’t the singing glorious?”

“We must go and find this Christ child,” cried Alphaeus.  “Let’s go to Bethlehem and look for this stable.”

“Not so fast Alphaeus,” I said.  “What about the sheep?  Who will protect them from thieves and predator animals?”

“Father, the angel wanted us to go and find the child.  I am sure in my heart that the angel will keep them safe.”

“I have the same feeling Simon.  I think we must go,” added Saul in a quiet but sure voice.

“I have the same feeling.  Let us go to Bethlehem and find the child.  And for some reason I think I know the stable in which to look,” I replied with confidence.[vii]

“Slow down David, slow down.  The three of us aren’t as young as you,” I called as David began to race ahead.

“Where do we look for the stable?” inquired Saul.

“I am sure that the stable of the inn is where the child sleeps.  Look there is Samuel the innkeeper.”

“Away from us you fools.  People are trying to sleep so go back to your sheep,” cried Samuel. “Samuel, Samuel, something amazing has happened!” I cried.  We had settled our sheep in the folds, built a campfire to warm us and were settled down talking around the fire.  Suddenly an angel was standing before us and all-around light shined like it was day.  Wow, we were terrified and thought to run.  But the angel said ‘fear not for I bring good news of great joy to everyone.  A savior is born to you.  He is Christ the lord.  You will find him in Bethlehem, in a stable, wrapped in cloths and lying in a manger.’  Suddenly the sky lit up and a host of angels were praising God and singing, ‘Glory to God in the highest and on earth peace, and delight toward all people.’  Do you know where we may find the child?”[viii]

As a matter of fact, I do know.  They are in my stable,” Samuel proclaimed proudly.  “Come and I will show you.”

“Simon you were right the baby is here,” exclaimed Saul.

“Now be very quiet and look in through the door,” said Samuel to the shepherds.  “Look Mary is still awake.  Can you see the child in the manger?”

“Come in, come look,” said Mary as she signalled to the shepherds.  “Jesus is sleeping in the manger.

“Simon.” Said Saul.  “The baby’s face and indeed the woman’s face both shine, just like the angel that came to us.  It is a miracle!  Let’s go and tell everyone.”

“It’s almost day.  Go and tell your families and neighbours and anyone else who will listen.  We will meet back at the camp by the folds.”

Back at camp David looked up to me and said, “father I will never forget this night.”

“I know son I know.”  And to the others I said, “imagine the anointed one of God, born in a stable, sleeping in a stable just like a poor shepherd.  He is indeed one of us!”[ix]

[i]  A sheepfold could be very permanent.; for example, fully walled with stone.  Or more temporary as in built into the cleft in a cliff face with a fence and gate at the entrance.  The purpose was two-fold; first to protect the sheep from predators and second to keep the sheep from wandering away in the night.
[ii] The Jewish people of that time believed that they would die if they looked on the face of God or other heavenly being.
[iii] The general reaction in scripture to the appearance of angels is fear, great fear.  Luke describes the shepherds as “as terrified.”  It also makes sense that the least afraid might be a curious child open to the miraculous.
[iv] The biblical text does not specify that Gabriel was the angel, but it seems reasonable since it was Gabriel who was sent by God to Mary and to Zachariah to herald God’s will.
[v] Swaddle: to wrap a baby tightly to restrict the movement of the arms and legs.  The translators seem worried about the cloth used to swaddle the baby Jesus: NIV; cloths, KJV; clothes, RSV; swaddling cloths, NEB; wrapped him around.  Most cultures both historical and modern swaddle babies.  They use blankets, cloths, special clothes and even built containers (example papoose or snuggles).
[vi] There is much debate about the phrase “to all men on whom His favour rests.”  NIV, NEB; peace to men on whom His favour rests KJV; peace good will toward men RSV; peace among men with whom He is pleased Phillips; peace upon Earth among men of good will From the Greek AnthroOpois: Mankind or people Eudokia: good will, kind intent, benevolence, delight, well seeming My translation; peace delight toward people.
[vii] Sheep were never left unattended.  The shepherds took a great step of faith to leave them and there is no evidence in the text that they left one shepherd behind to watch over all the sheep.
[viii] A meeting of the innkeeper and the shepherds is not in the biblical text but follows well if the shepherds were to find Jesus and also it is consistent with the Innkeeper’s Tale.
[ix] A theme of Luke’s story is that Jesus is a peasant, an ordinary guy, one of us, while the incarnate God.